What is Synergy Land? A Comprehensive Guide - Rainmaker Games

Developed by Synergy Studio, the upcoming blockchain-based multiplayer action role- playing game (ARPG) Synergy Land features a fantastical world separated into four cosystems based on the elements of earth, water, fire, and ice. The game has a dynamic and unique spell system that lets players combine ingredients to create spells, creating new beneficial or detrimental synergies between them, and allows for up to four people to explore dungeons together on a grand adventure against incredibly powerful creatures.

The game takes its inspiration from other popular games like Diablo and Path of Exile, and aims to merge their strengths by providing a fun and challenging experience for both casual and dedicated players, as well as an ecosystem for those who wish to collect and trade NFTs, thereby granting the player community full control over its virtual possessions. Playable on both PC and mobile platforms, this game is a true cross-platform action role-playing experience.

The Team Behind Synergy Land

Synergy Studio is an up-and-coming studio founded by veterans of the video game business with a combined 16 years of expertise. Experts with experience at Ubisoft, 2K, MercurySteam, Framestore, Digital Legends, and other top studios. people that have contributed to franchises like Assassin's Creed, Metroid, Castlevania Lords of Shadow, Warhammer Vermintide, Ghost Recon, Beyond Good and Evil, etc. The studios' ultimate goal is to introduce players to a novel gaming experience; to this end, we plan to utilize the blockchain to create games based on the Play to Earn gaming model, allowing players to earn real money while playing their favorite games. 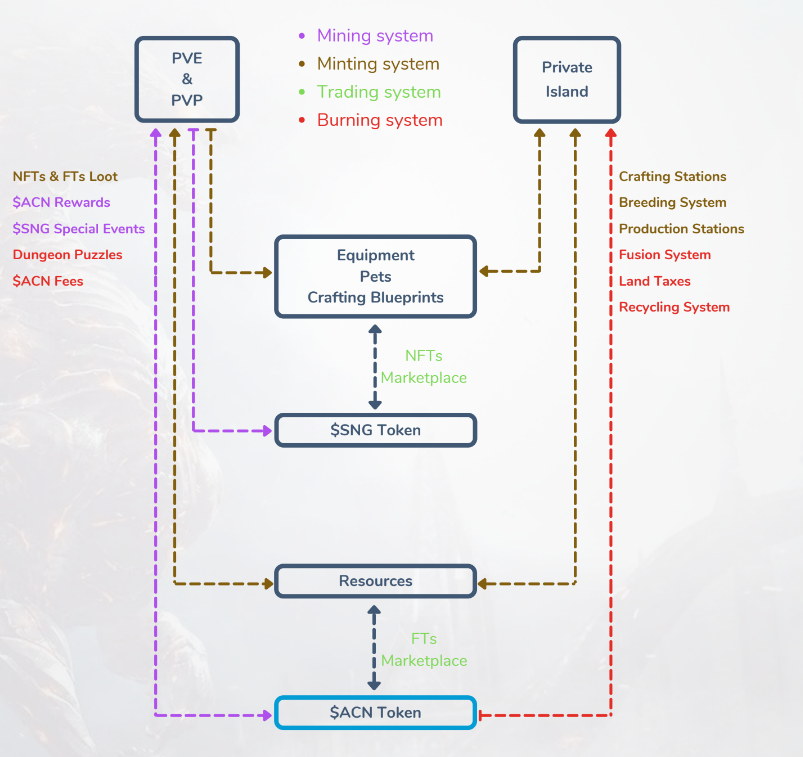 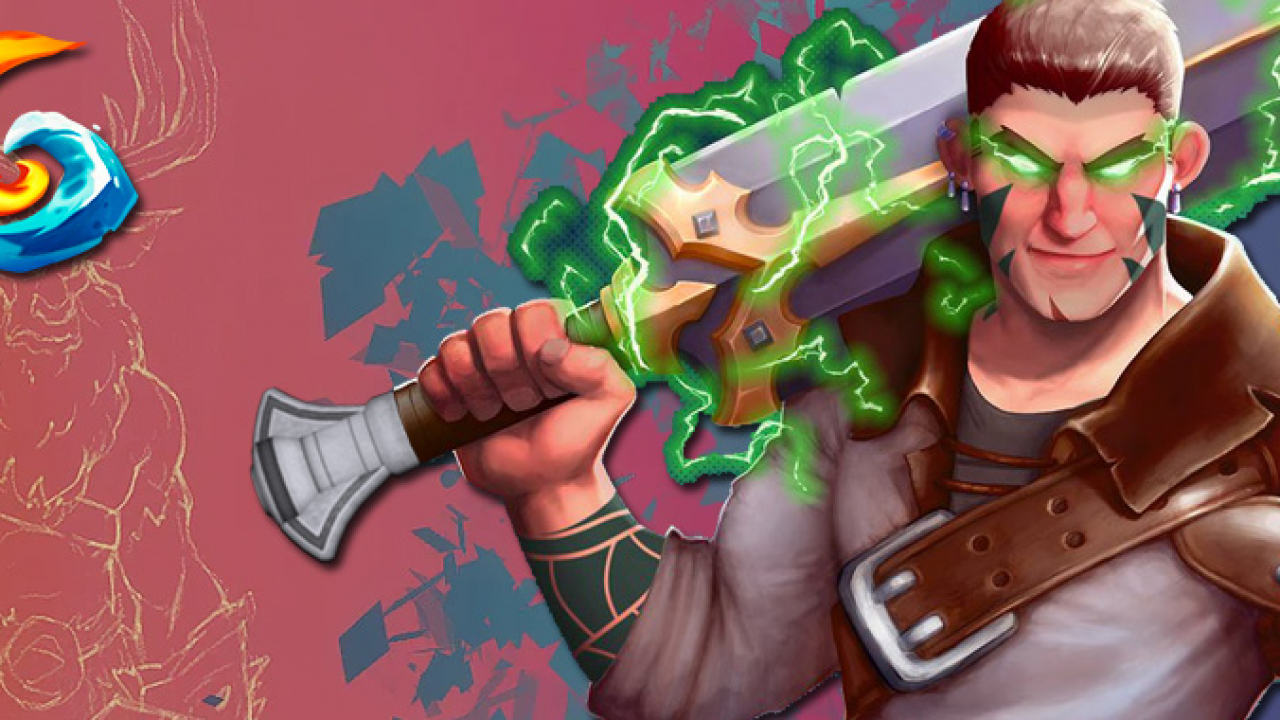 Champions are a type of playable character in video games. To increase their chances of success when facing off against bosses, users need learn to master the abilities of their chosen heroes. When a user logs in and chooses a hero, they are given the opportunity to fight in seasonal arena battles for rewards based on their position on the scoreboard. Users can also participate in a cooperative multiplayer mode outside of the arena. The odds of success in the dungeons, both in terms of killing monsters and looting treasure, improve when players band together.

In the same way that players select their Heroes at the outset, they also get to pick their companion animals. Players engage in turn-based role-playing fights with their pets. Each pet has its own set of skills, and only by mastering those skills can the player unlock opportunities to develop potent synergy between them. Players who place highly on the leaderboard will also be rewarded with NFT tokens.

In order to have a character, you just need to breed two creatures that are genetically compatible with each other. A pet that has been bred will eventually lay an egg that will need to be hatched. Any positive qualities either parent possessed are passed on to the offspring. You can change these characteristics, though, by spending loot from the dungeons you've explored.

Alpha and Beta access are only available to in-game NFT holders as follows:

In light of this, the Synergian Badge NFT sale will begin on July 20 and 21. You need to have at least one Synergian NFT in order to acquire a common badge. Characters, Bosses, Pets, Equipment, Crafting Blueprints, Station Blueprints, and Furnishings are all examples of Non-Functioning Items that can be purchased in Synergy Land.

Pre-orders will grant access to a limited number of NFTs, including playable characters, bosses, pets, and station blueprints. There is a small chance of finding pets and station blueprints among dungeon loot. Blueprints for equipment and crafting can only be found as loot in dungeons or manufactured in stations; they can be combined to improve their rarity. 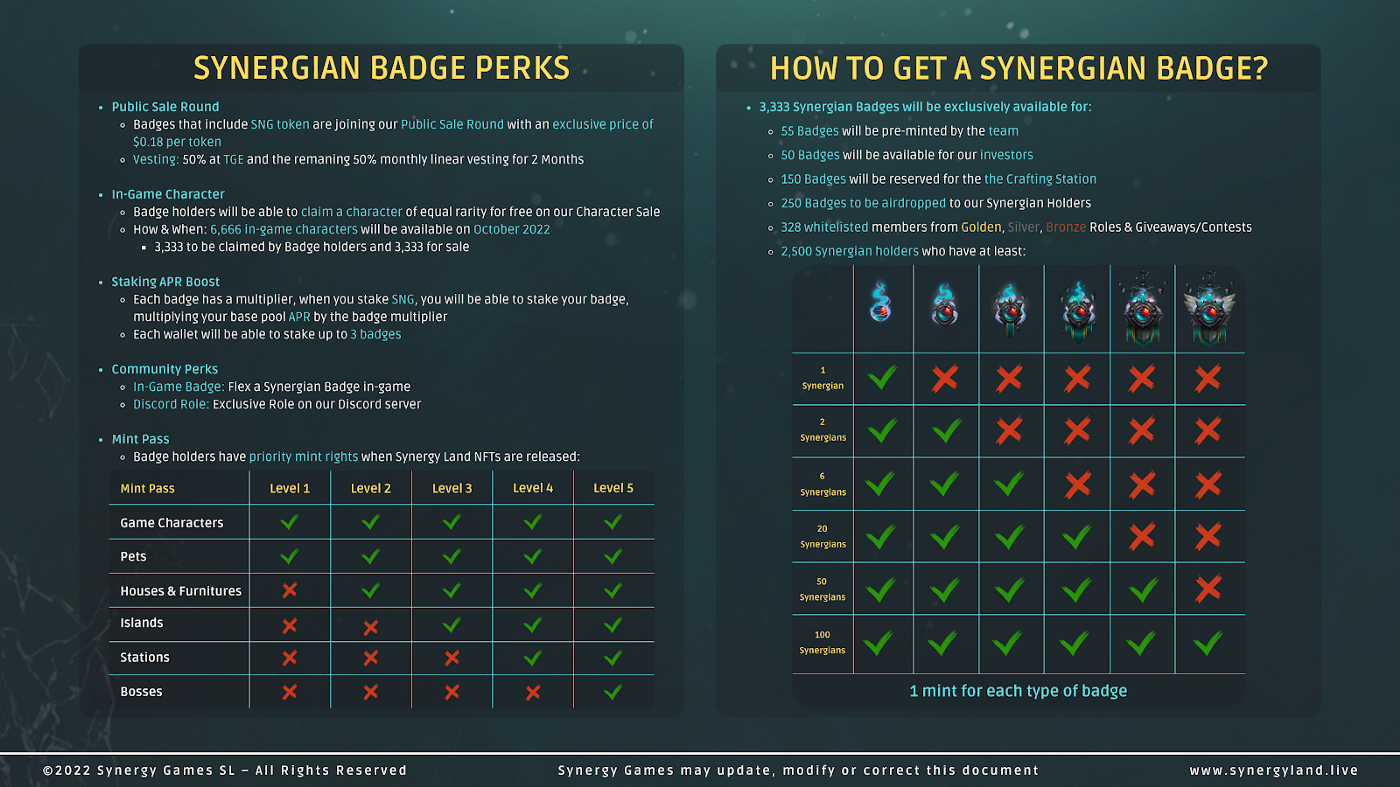 Synergy Games has great professionals with many years of experience developing with this engine Unreal Engine allows us to give life to incredible experiences in real time, many possibilities of integration and creation of assets and the most important feature, a stability of development in the production of a game.

In terms of overall performance, Solana is now among the top blockchains for creating games. With very low costs and the ability to process thousands of transactions each second. Their obstruct times are quantified by Solana in milliseconds. As a result, all in-game purchases will be processed much more quickly. Solana is reliable, quick, cheap, and accommodating to gamers.

That's it for our beginner's guide on Synergy Land.  Start playing Synergy Land by clicking here. If you have a game you want to see published in Rainmaker Games, follow the steps on this  article, good luck.