What is Dracoo Master? A Comprehensive Guide - Rainmaker Games

Dracoo World is a blockchain virtual world based on Dracoo IP. Users can trade virtual land on the blockchain, create original settings and games with the map editor and game editor, and interact with other Web3 applications and ecosystems from across the world. In addition, we welcome NFTs from other universes.

The company's long-term goal is to create a whole Dracoo World setting from scratch using Dracoo IP. A full community and an open, fair community trading system will be part of this universe alongside a number of games based on Dracoo IP, a blockchain-based feature that allows users to buy and sell lands and freely create buildings on these lands, an editor that allows users to freely edit and publish Dracoo games, and so on. Dracoo World is the most widely used decentralized social platform in the MMORPG industry, and we are working hard to make it even better.

Dracoo Master is a strategic take on the standard battle structure of most trading card games, and it uses the Dracoo characters as its base. Different Dracoo appendages have different abilities, which are explained to their owners via trading cards.

Players earn $BAS or $DRA, two currencies exclusive to the Dracoo World community, by participating in the Adventure mode or the Arena mode with a deck they've built using cards obtained from breeding Dracoos and using those cards to defeat other players. 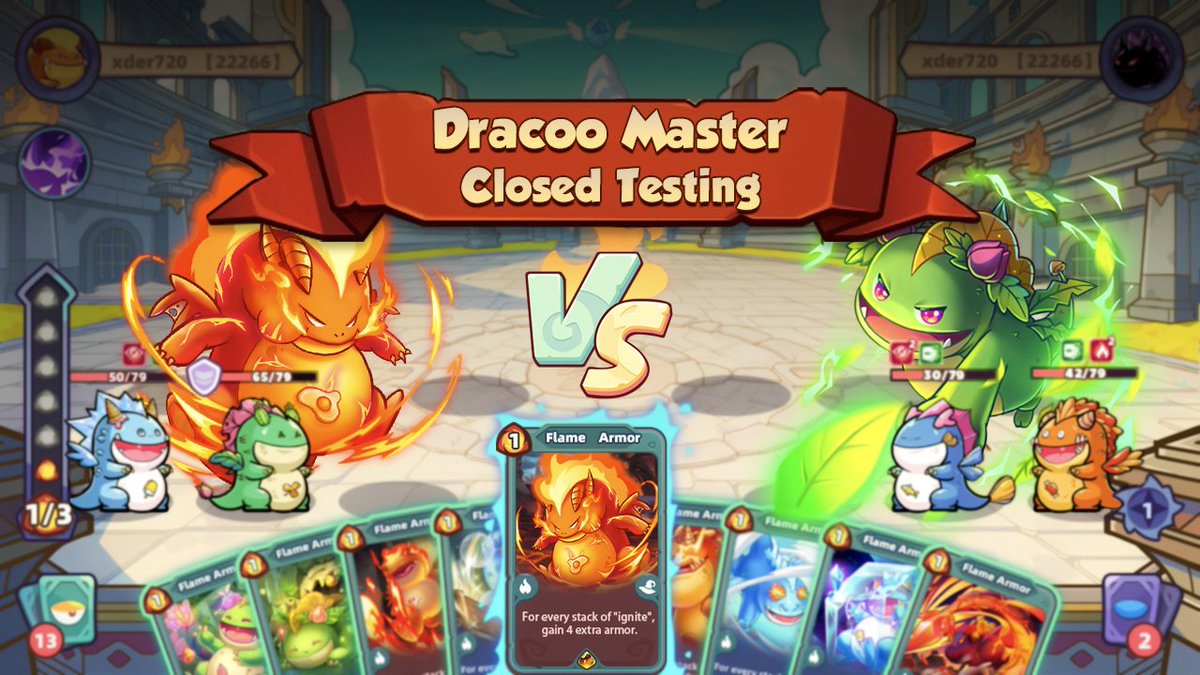 In addition, the tools for editing maps will be included in the game for user use. In addition to participating in the game and earning rewards, users can use the map editor to freely alter and publish their own stages.

DracooMaster mashes up the deck-building mechanic of board games with the action of digital card duels. Winning the battle and getting your hands on the loot requires you to use your card talents to launch an attack and vanquish the adversaries on the battlefield.

1. Round: The mechanism will arbitrarily pair off the offensive and defensive roles of the two players. Every action will be taken in turn by both players, starting with the attacking player. In order to keep the arena style fight scenario orderly, each turn is limited for a maximum of 60 seconds. You may take as much time as you wish on your turn in Adventure mode.

When it's your turn, the computer will automatically fill your hand with five cards from the Draw Pile. When the Draw Pile is empty, the Discard Pile will be shuffled and used as a new Draw Pile. It's up to you to figure out a plan for playing the game, which includes choosing which cards to use and in what order.

When you have nothing more to play, your turn ends. The completion of the countdown signifies the end of your turn as well. Your turn finishes and your opponent's begins when all of the cards in your hand are discarded to the discard pile.

2. Use of Cards: With each card having its own unique function, the best way to utilize it in combat varies depending on the situation. In order for a card to be used, the player must first drag it to the battle zone, then choose a target for the card, and then release the card for it to take effect. In order to activate most cards, you must first choose an opponent to attack, whereas for those that don't, you can simply drop them wherever in the field of combat.

In order to use a card, you must first spend the appropriate quantity of Energy points, which are displayed in the upper left corner of each card. In a standard combat, you have access to three Energy points per turn; but, in Arena mode, if you choose to go on the offensive on your first turn, you will only have access to two Energy points.

4. Character's Position: Depending on the situation, a Dracoo can play a pivotal role in the fight. Dracoos standing at the front are easier to hit with melee assaults, whereas Dracoos standing in the back can only be attacked with ranged weapons.

Prior to a fight, players must use the Team interface to set the formation of their three Dracoos. Though it's tempting to line up your Dracoos, remember that some attacks have penetrating effects that can hit multiple Dracoos if they're in a row.

1. Adventure Mode (Player Vs Enviroment): You'll need three Dracoos to join in. It is customary for adventurers to begin their quest from the base of the Sacred Peak, fight off any obstacles they encounter along the way, and then return to the peak to collect their spoils.

2. Arena Mode (Player Vs Player): You'll need three Dracoos to join in. Enter the Arena with your Dracoo squad and face off against other players. Take them all out and stamp your name in the victory column.

3. Guild War(Guild Vs Guild): In order to play, players must first join a guild. Using Dracoos, guilds compete for territories and use the territory's resources to fortify themselves.

4. Challenge Mode (Player Vs Player): Only one Dracoo is required for this activity. Pick out a unique set of abilities for your Dracoo from the system-issued set, then take it into battle against other Dracoos to earn the ultimate prize. 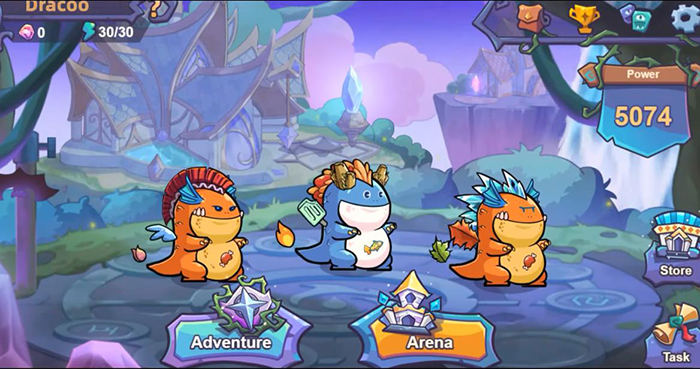 Through the PVP competitive mode, you will receive $BAS currency rewards after you win each game. The daily amount you can get is limited. If you have a stronger Dracoo team, you will get more $DRA rewards from special events every season.

1. For Asset Holders: Among the available digital assets are the Summoner NFT and the Advanced Dracoo. You are free to resell or lease out both your Dracoo and Summoner NFT. Players that are unable to win or breed these assets might instead lease them in the market. Dracoo with a low market value can be pledged to the market in exchange for a steady pledge income.

2. For Players: The roguelike features of Dracoo Master can keep players busy for hundreds, if not thousands, of hours. Playing Dracoo Master will help you become a better player, build a stronger Dracoo team, and earn you $BAS.

3. For  Breeders: You can also play the role of a breeder in Dracoo Master, building and designing superior Dracoo decks and selling them in tournaments or on the market to reap enormous financial rewards.

Dracoo Master ($BAS) Token is currently trading at around $0.1108 from  Coinmarketcap's data with a current market capital of $553,457.

2. Dracoo Master ($DRA) - provides the economic incentives which will be distributed to encourage users to contribute to and participate in the ecosystem on Dracoo Master, thereby creating a mutually beneficial system where every participant is fairly compensated for its efforts.

That's it for our beginner's guide on Chain Guardians.  Start playing Chain Guardians by clicking here. If you have a game you want to see published in Rainmaker Games, follow the steps on this  article, good luck.